When navigating and understanding our world, both globes and maps are turned out to boost our understanding of what’s beyond our here and now. But are the two the same?

What Is a Map?

When comparing maps and globes, we must first understand what each is. Beginning with maps, this geographical tool depicts specific geographical locations as pictures and general outlines. With this tool, you can gather a perspective of an area. Coming in both static and dynamic forms, maps are primarily utilized to show geography, as well as represent fictional worlds, too.

Typically, maps consist of distance, direction, and symbols. A scale is created for maps to better grasp the distance between the spaces depicted. Additionally, symbols of North, East, South, and West are used to orient yourself on the map.

What Types of Maps Are There?

There are two main types of maps: reference and thematic maps. Our Replogle wall maps come in both styles, which have different perks and depictions for your needs. Let’s break it down.

What Is a Globe?

To further understand globes vs maps, let’s define what a globe is.

Unlike a map, a globe is a three-dimensional spherical depiction of Earth. Additionally, globes can be used to represent other planets or celestial bodies, too. The term “terrestrial globe” refers to a globe of Earth, while any other celestial being is called a “celestial globe”.

Typically, a globe of Earth depicts just two colors – brown and blue. As expected, blue represents oceans and other bodies of water, while brown signifies land.

What Different Types of Globes Exist? 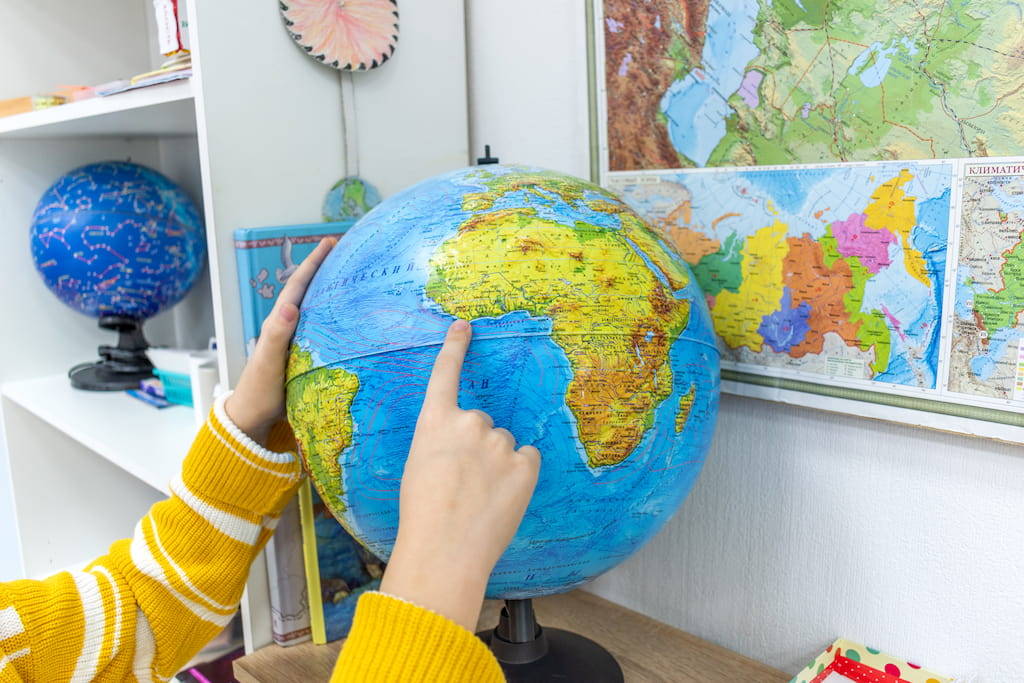 Navigating the question of when would you use a globe depends on the type of globe you are looking at. With many different types of globes, we are breaking down the differences between each to further understand the options available today.

This is just a glimpse of the globes available today. With many depictions created, there is a globe to suit every preference and design aesthetic.

What Are the Key Differences Between Maps and Globes?

When it comes to answering the question of how are maps and globes different, there are quite a few differentiating factors for each. To better understand what is the difference between globe and map depictions of earth, here are the key differences:

Despite all the ways in which globes and maps are different, there are some similarities. So, how are maps and globes alike? Both geographical tools use symbols and colors to help depict the area they are showing. Additionally, they both provide image representations of Earth or other spaces, serving as a point of information and reference. So, while the form in which they depict these spaces or the way in which they are used may vary, maps and globes both serve an important purpose in understanding our geography.

From answering why we need maps and globes, to the difference between globe and map representations, and all that we can use them for, there are many reasons to explore both of these geographical tools. But why is a globe better than a map or vice versa? Now that’s entirely up to your preference.

In terms of decor and a statement piece in your home, globes serve as a beautiful addition to any space. To explore a range of different globe designs, shop for globes from Replogle today. But if you still have questions, you can contact us!